The short bio: Husband to Megan. Father of Four. Pastor of Chandler since 2010. (The Epic Bio is below.) 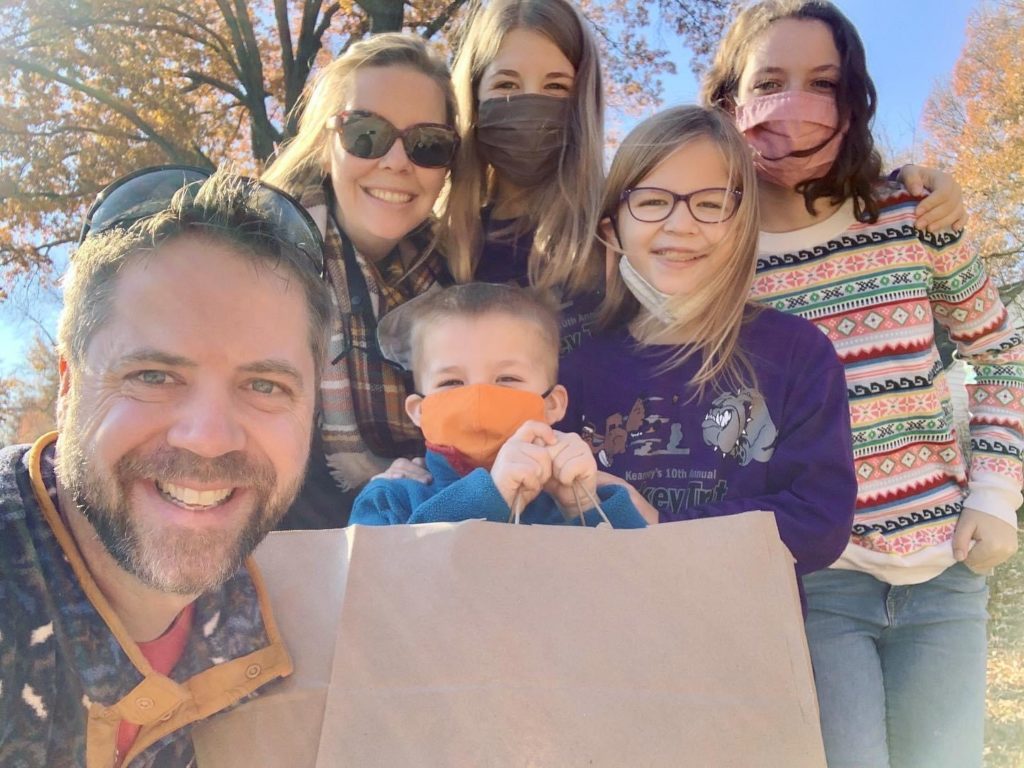 So this is the epic version of my bio. The actual version is filled with more chores and homework. But both versions include coffee ice cream. Which, along with prayer, holds our family together.

Now the crucial details. My favorite baseball team is the Kansas City Royals (where I grew up). Throughout my travels, from SBU (where I met Meg), to Truett Seminary, and in Augusta as a Middle School Minister, I kept the hope alive! For years my hopes and dreams might as well have been stuffed in one of the kids’ build-a-bears. We came to Chandler in 2010, hoping to bring new luck and …  we did!  The Royals won the World Series!

As for Megan, she grew up in Tulsa and roots for the Royals out of love (or maybe because I share my ice cream?). She was a high school teacher (supporting me through seminary, beauty and brains) before our children came and for a time she focused keeping our house sane. But when that proved impossible, she became the Secretary at Kearney Middle School.

People often ask where we found our little ones’ names. I must admit we discovered Ivy’s (2006) name in The Village, a movie by M. Night Shyamalan. Phoebe’s (2009) name is found in Romans 16:1, a deacon of the church. Darcy’s (2011) name came from a brilliant young lady in Augusta – not the “mister” in some unknown book! And Ezekiel (2015) is named after my favorite prophet.

I promised an epic bio only to arrive at the end and realize all the epic events are happening at home – amid the chores and homework! So if you need me, home is where I am heading. Contact us and we will invite you over for ice cream, but come prepared to do math facts.

Vision for the Church

In Ezekiel 47:1-12 the prophet approaches the temple and discovers the plumbing has ruptured and water is pouring out of the building. The water rushes out and flows to the East, a river growing wider and deeper as it travels. The scripture says wherever this water flows everything will live. Even more radical, whenever this water encounters salt water, the salt water is transformed into fresh water.

The church has not been called to remain inside; instead Jesus is calling us out into the world. And in a reversal of logic evil will not corrupt us, but the love and grace of God will corrupt sin (as the fresh water from the temple purifies the salt water). Not by our own actions, but by the cross darkness HAS BEEN defeated! Our call is not to avoid sin, but to plunge into the river and flow into world. To love the world and live the victory Christ has provided.

My prayer is that our ministry at Chandler may be a place to dive and that it will bring a flow of blessing to the world!

What does it mean to be a Christian?

“Whoever wants to be my disciple must deny themselves and take up their cross and follow me.” – Matthew 16:24

Jesus did not arrive with checklists, but a simple calling: “follow me”. This relationship, between us and Christ, is everything about Christianity. If you know Jesus, if you walk with Jesus (trying to be his hands and feet), then you are a Christian. We see this simple message in scripture — leaving their nets or even money on the table to follow Jesus. I have always liked how Kierkegaard puts it:

Imagine a big, well-trained obedient hunting dog. He accompanies his master on a visit to a family where, as all too often in our time, there is a whole assembly of ill-behaved youths. Their eyes hardly light upon the hound before they begin to maltreat it in every kind of way. The hound, which was well-trained, as these youths were not, fixes his eye at once upon his master to ascertain from his expression what he expects him to do. And he understands the glance to mean that he is to put up with all the ill-treatment, accept it indeed as though it were sheer kindness conferred upon him. Thereupon the youths of course became still more rough, and finally they agreed that it must be a prodigiously stupid dog which puts up with everything. The dog meanwhile is concerned only about one thing, what the master’s glance commands him to do. And lo, that glance is suddenly altered; it signifies—and the hound understands it at once—use your strength. That instant with a single leap he has seized the biggest lout and thrown him to the ground—and now no one stops him, except the master’s glance, and the same instant he is as he was a moment before. — Just so with me.

Jesus has turned the world upside down. Rather than finding those who have achieved, God seeks all who will let go and follow Jesus.  Or, as RS Thomas puts it, Jesus seeks those willing to become pawns in the hands of Love, who is God.

Your move I would have
said, but he was not
playing; my game a dilemma
that was without horns.
As though one can sit at the table
with God! His mind shines
on the black and white
squares. We stake our all
on the capture of the one
queen, as though to hold life
to ransom. He, if he plays, plays.
unconcernedly among the pawns